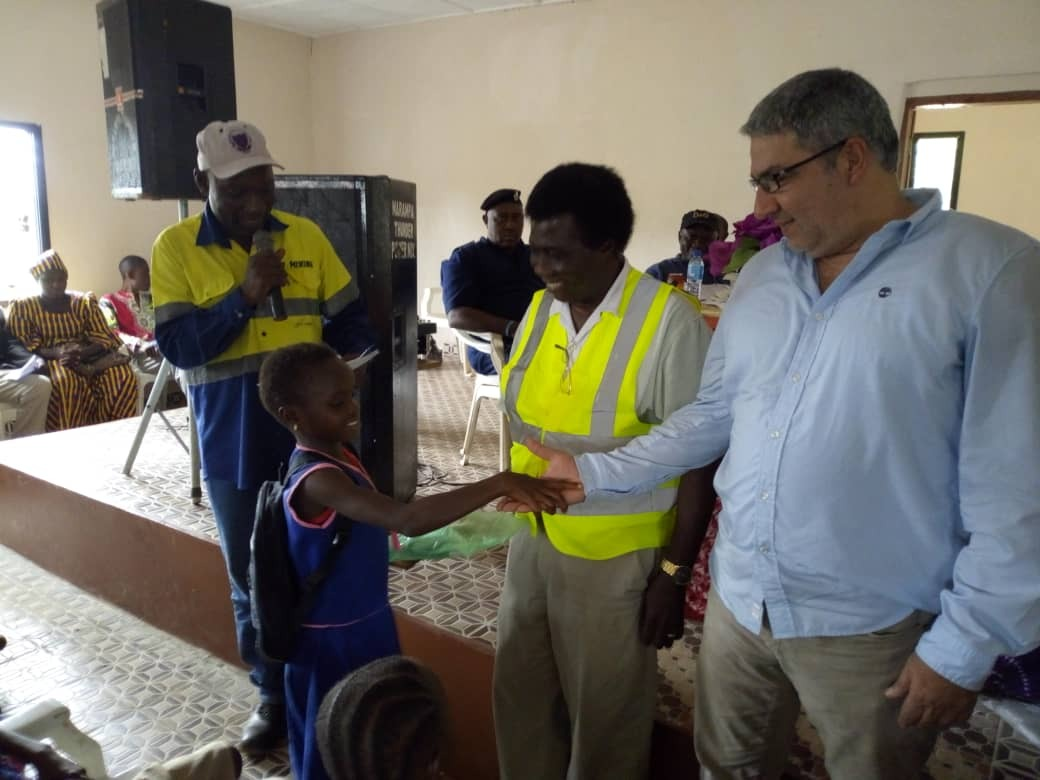 Lunsar, Sierra Leone: 27 May 2019: A thousand children in Port Loko District received school supplies from SL Mining, currently Sierra Leone’s only operating mine and one of Africa’s highest quality iron ore producers. During the month of May, each young student was given a school kit that included a school bag; books, pens, pencils, erasers, and a mathematical set. The beneficiaries of the donation are from Marampa and Maforki Chiefdoms. This donation from SL Mining was made to support the Free Quality Education Program launched in Sierra Leone last year by President Maada Bio.

Dr. Kamarah, Director of Community Relations at SL Mining stated that the Country’s only operational iron ore producer is committed to community development. “SL Mining is sensitive and responsive to the demands and desires of the people in its operational areas,” said Dr. Kamarah.

Abdul Karim Kamara, Member of Parliament, Constituency 069, gave the vote of thanks. He remarked that SL Mining had exceeded his expectations. “If SL Mining has yet to begin exporting and they are already giving back to the community, then the future of our communities looks bright as it demonstrates the commitment of SL Mining to local community development.” said Hon. Karim Kamara. Paramount Chief Koblo Queen II, who witnessed the occasion of the SL Mining school supplies donation said that his chiefdom was now at the threshold of development. He urged parents to support their children’s educational journey.

Mrs. S. Dumbuya, Deputy Head Teacher SLC Primary School, Gbere Junction, in her statement thanked SL Mining on behalf of the parents, pupils, and teachers of the community for the donation. She said that the bags, books, pens and other materials will be used by the children for their intended purpose. She further asked the company to continue its community support especially in the area of education.

About SL Mining:
SL Mining Limited is a wholly owned subsidiary of Gerald Group engaged in the exploration, development, and production of iron ore concentrate at Marampa in the Port Loko District, Northern Province, Sierra Leone. SL Mining takes pride in playing a growing and active role in regenerating the communities in the Lunsar have. Investments in the iron mine have led to significant job creation in Sierra Leone, direct socio-economic benefits to surrounding communities, and additional revenues to the country.
For more information: slmining.com