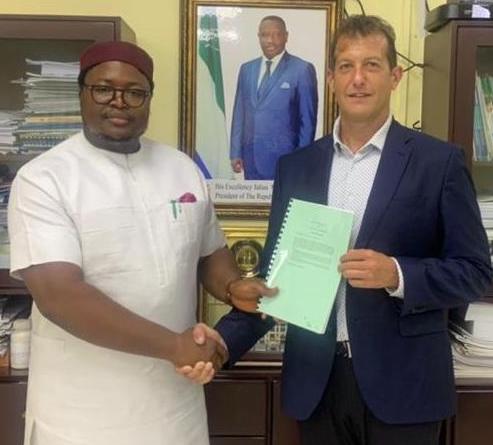 Marampa Mines Limited is pleased to announce the ratification of its

Freetown, 17 December 2021: Marampa Mines Limited, (“MML”, “Marampa Mines” or “the Company”), is pleased to announce the ratification of its new Large Scale Mining Licence Agreement (also known as Mining Licence Agreement or “MLA”) by the Sierra Leone Parliament on 16 December 2021. The MLA was put forward to Parliament by the Minister of Mines and Mineral Resources, Mr. Timothy Musa Kabba, on behalf of the Government of the Republic of Sierra Leone (“GoSL”) and was unanimously approved yesterday. MML has also paid a final installment of USD 10 million today, as part of a fixed sum of USD 20 million to the GoSL, pursuant to the binding Settlement Agreement.

Craig Dean, Executive Chairman and CEO, Gerald Group, commented: “I would like to thank His Excellency President Bio and his administration for their commitment over the past several months, as we look forward to a new era of partnership between Gerald / MML, the GoSL and all our stakeholders. Since we signed the Settlement Agreement earlier this year, Marampa Mines has successfully, 1) loaded and exported more than 700,000 tonnes of iron ore concentrate, beneficiated by SL Mining Limited 2) restarted production, processing and exports of Marampa BlueTM, our premium >65% Fe iron ore product, and 3) with the MLA coming into effect, MML will ramp up the Project, generating significant employment opportunities and other benefits for the country and our communities. As indicated previously, we are considering a significant expansion of the Marampa Project and related infrastructure, which will allow our iron ore asset to become a major contributor to economic growth and development in Sierra Leone.” The MLA’s ratification also sees the ICC and ICSID arbitration between the GoSL and Gerald International Limited/SL Mining Limited being withdrawn and discontinued.

The Honourable Minister of Mines and Minerals Resources, Mr. Kabba, said: “This could not have happened but for the astute leadership of His Excellency, the President, who graciously ended the matter and provided guidance and leadership for turning a new page of partnership, that is now based on trust and benefit for the people of Sierra Leone and Gerald group.”

The MLA granted to Marampa Mines is for an initial period of 25 years, renewable thereafter for 15 years. Under MML’s mining obligations, the Company will conduct operations to promote the growth of the economy, including integrating the mining operations with other sectors in the country and maximising local content and the supply chain within Sierra Leone. The GoSL undertakes to facilitate use of all existing rail and port infrastructure, while allowing the Company the right to build similar infrastructure for the expansion of the Project’s mining, logistics and export operations throughout the duration of the MLA. MML is also pleased to support the Lunsar community, and will make payments to a Community Development Fund, at a rate of 1% of the Free on Board revenue received by MML in accordance with the MLA.

MML started operations on 1 June 2021 following the Settlement Agreement with the GoSL on 7 May 2021. The number of jobs at the Marampa Project are expected to rise to 1,400 within weeks as the Company implements its development plan in a phased manner. MML is in the process of increasing production of iron ore concentrate from 2M dmtpa to 3.25M dmtpa, progressively generating vital revenues for the country and fulfilling other important commitments, as the Project expands.

Marampa Mines Limited, a subsidiary of Gerald Group (“Gerald”), one of the world’s leading metals merchants, is engaged in the development and production of iron ore concentrate from compliant resources of approximately 1.7B tonnes at Marampa in the Port Look District of the northern province of Sierra Leone. The Company, 90% owned by the Gerald Group, with the remaining 10% owned by the Government of Sierra Leone, is committed to being a globally competitive, world-class iron ore concentrate producer. Through sustainable investment, expertise and long-term commitment to the Marampa Project, MML aims to materially develop its production of >65% Fe quality iron ore concentrate, which is among the highest and purest grades in Africa and globally, and branded Marampa BlueTM. The Company aims to be a significant contributor to Sierra Leone’s economy and to local communities. ESG initiatives are aimed at embracing the challenges relating to climate change, advancement of women, farming and education to build a better and sustainable future.